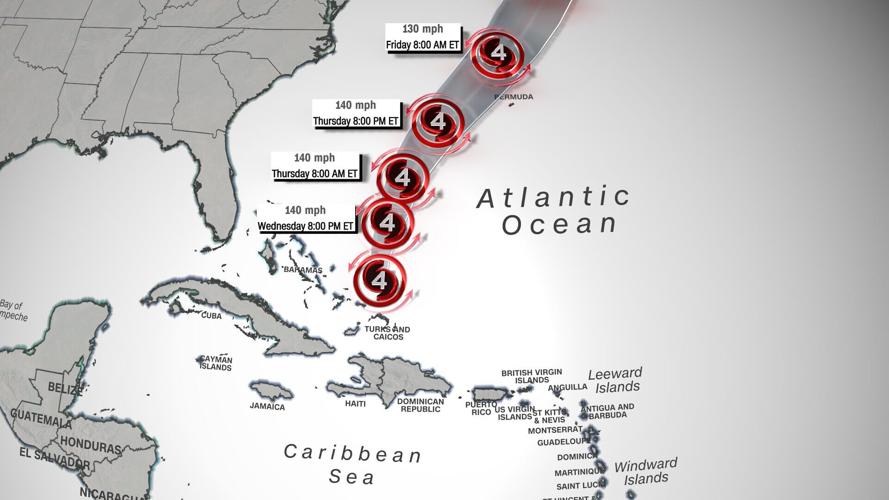 Hurricane Fiona has escalated into a Category 4 storm as it continues its catastrophic path northward on September 21, leaving behind disaster-stricken communities in Puerto Rico, Turks and Caicos and the Dominican Republic who must now begin working toward recovery. 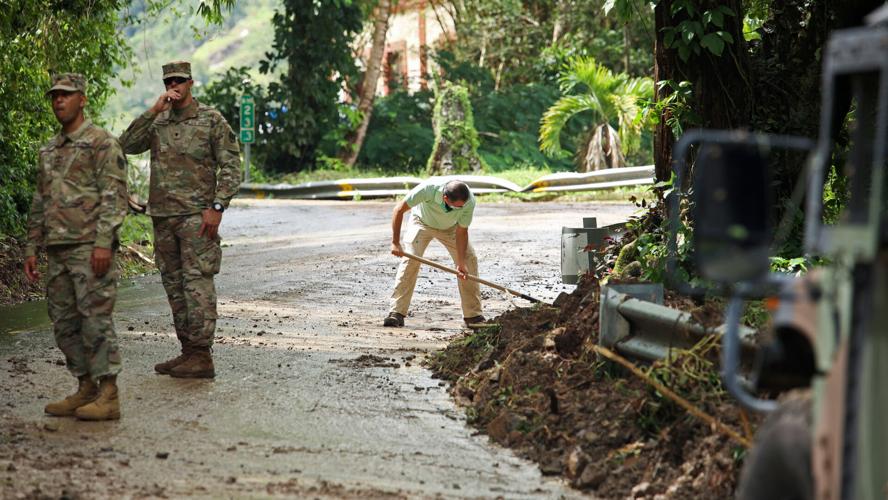 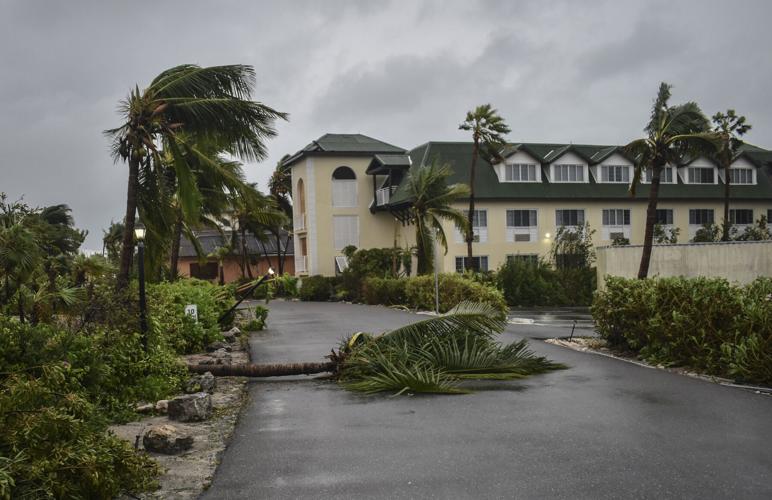 Fallen palm trees lay over the Ports of Call Resort entrance in Providenciales, Turks and Caicos Islands, on September 20.

Hurricane Fiona has escalated into a Category 4 storm as it continues its catastrophic path northward on September 21, leaving behind disaster-stricken communities in Puerto Rico, Turks and Caicos and the Dominican Republic who must now begin working toward recovery.

Fallen palm trees lay over the Ports of Call Resort entrance in Providenciales, Turks and Caicos Islands, on September 20.

With Category 4 Hurricane Fiona poised to sideswipe Bermuda later this week, people in the storm's deadly wake still faced days without basic utilities Wednesday -- including much of Puerto Rico, where most were left without power and running water.

Only about 395,000 of Puerto Rico's 1.5 million utility customers had power by 1 p.m. Wednesday, the island's energy provider said. And about half of the island's customers still were without running water, Federal Emergency Management Agency Administrator Deanne Criswell said Wednesday morning.

Water is the top concern for residents like Carlos Vega, whose town of Cayey in the mountains of east-central Puerto Rico faced not only utility outages but also partially collapsed roads -- an effect of the major flooding and more than 2 feet of rain that parts of Puerto Rico were hit with.

"(Being without) power ... we can face that and we can deal with that. The biggest concern is with our water. Can't live without water," Vega told CNN on Tuesday.

Fiona killed at least five people in the Caribbean as it tore through the region last weekend and into this week, including one in Guadeloupe, two in Puerto Rico, and two in the Dominican Republic.

Fiona also whipped parts of the Turks and Caicos islands on Tuesday with sustained winds of almost 125 mph, officials said. That left many areas without power, including on Grand Turk, South Caicos, Salt Cay, North Caicos and Middle Caicos, said Anya Williams, the deputy governor of the islands.

No deaths or serious injuries had been reported in Turks and Caicos as of Tuesday evening, Williams said.

Fiona's flooding especially left critical infrastructure damage in Puerto Rico and then the Dominican Republic, which the storm crossed Monday. More than 1 million utility customers in the Dominican Republic had no water service as of Wednesday morning, and more than 349,000 customers were without power, according to Maj. Gen. Juan Méndez García, director of the country's emergency operations center.

The power outages come as parts of the Caribbean face stifling heat. Heat indices -- what the air feels like when combining temperature and humidity -- of 105 to 109 degrees are expected Wednesday in north-central, northwestern and western portions of Puerto Rico, the National Weather Service said.

The landfall in Puerto Rico on Sunday came nearly five years after Hurricane Maria devastated the island, leaving thousands dead and cutting power to and water service to more than 1 million people for what would become months.

Storm presses north and could threaten Bermuda and Atlantic Canada

Fiona, after its center passed the Turks and Caicos as a Category 3 storm, strengthened to Category 4 -- sustained winds of at least 130 mph -- early Wednesday over the Atlantic.

Around 2 p.m. ET Wednesday, it was centered about 650 miles southwest of Bermuda, heading north with sustained winds of 130 mph, the Miami-based National Hurricane Center said.

Fiona's powerful center is currently expected to pass west of Bermuda, sparing the British island territory its worst winds. But sustained winds of at least tropical-storm force -- 39 to 73 mph -- are expected to reach Bermuda by late Thursday or early Friday, the center said.

The US State Department issued a travel advisory Tuesday urging US citizens to reconsider travel to Bermuda because of the storm. The department also authorized family members of US government personnel to leave the island in anticipation of the storm.

Though the storm isn't expected to track near the US East Coast, it could generate onshore waves of 8 to 10 feet there over the weekend, CNN meteorologist Chad Myers said Wednesday.

"It's not a good weekend to go to the shore and get in the water -- it's time to stay out of the water," Myers said of the East Coast.

The storm has strengthened over the past few days -- it made landfall in Puerto Rico and the Dominican Republic as a Category 1 hurricane before battering both with outer bands as it moved over water and toward the Turks and Caicos as a storm in Categories 2 and 3.

'We can't take it any longer'

Many in the Dominican Republic and Puerto Rico still are grappling with Fiona's aftermath and will likely face a prolonged relief and recovery process.

"Thank God my girls (are) safe. I managed to cover them with something and block them with a washing machine," she told Noticias SIN this week.

Another woman in Nizao who was clearing mud from belongings told Noticias SIN that she was frustrated because flooding frequently damages the region. This week, she left all belongings behind when floodwater encroached, she said.

"We can't take it any longer. Every year we lose our bed, clothes, food, everything," the second woman told Noticias SIN.

More than 610 homes in the Dominican Republic have been destroyed, and some communities were cut off from aid due to the storm, said García, the nation's emergency operations center director.

In Puerto Rico, Gov. Pedro Pierluisi expected "a large portion of the population" would have power restored by late Wednesday, with the exception of the island's southern region, which has suffered the most severe damage, he said Tuesday.

But restoration crews faced challenges: Many lines thought to have been repaired were temporarily knocked back offline because of various equipment issues, according to Josué Colón, executive director of the Puerto Rico Electric Power Authority.

Crews could also encounter issues that require a pause in work so that an already impaired grid is not overloaded, a spokesman for the power provider, LUMA Energy, said Wednesday.

On Wednesday, Pierluisi will take an aerial tour of the island with Criswell, the FEMA administrator, he said. Criswell arrived on Tuesday to determine what additional federal help is needed, and that day surveyed damage with the governor in the city of Patillas.

"The community there ... (had) severely impacted roads, and bridges were damaged. Water was flooding the streets, and ... other parts of the community (were) inaccessible," Criswell said during a news conference Wednesday.

"But I also saw a resilient Puerto Rico," she said. "I met with a woman named Anna, who opened up her own home in her own driveway to help create a path for the community. With the bridge that was washed away, her home became that pathway to help give food and water to the rest of her community."

The storm is a catastrophic blow to Puerto Rico, which was still recovering in some areas from when Hurricane Maria ripped through the island in 2017, inflicting widespread infrastructure damage and destroying homes.

The damage caused by Fiona is "devastating" and "catastrophic" in the island's center, south and southeast regions, Pierluisi said Tuesday.

Across Puerto Rico, more than 1,200 people were housed in dozens of shelters on Tuesday, the governor said. About 200 families were stranded in the Barros sector of the island because a bridge had been destroyed, according to the governor.

Emergency crews are struggling against mudslides and flood conditions, which were blocking access to parts of the power grid as well as highly impacted and remote areas that need supplies, a CNN crew there reported.

Breyer makes it official: He's leaving the Supreme Court on Thursday at noon