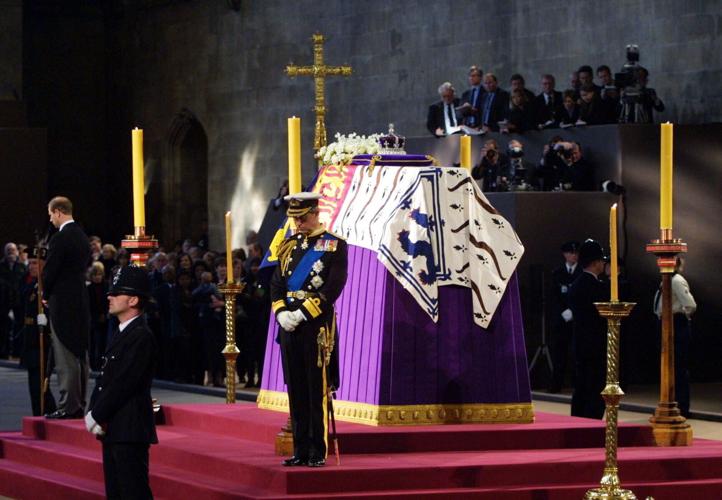 Then-Prince Charles and his brother Edward, left, stand vigil beside their grandmother's coffin while the Queen Mother lies in state at Westminster Hall in 2002. 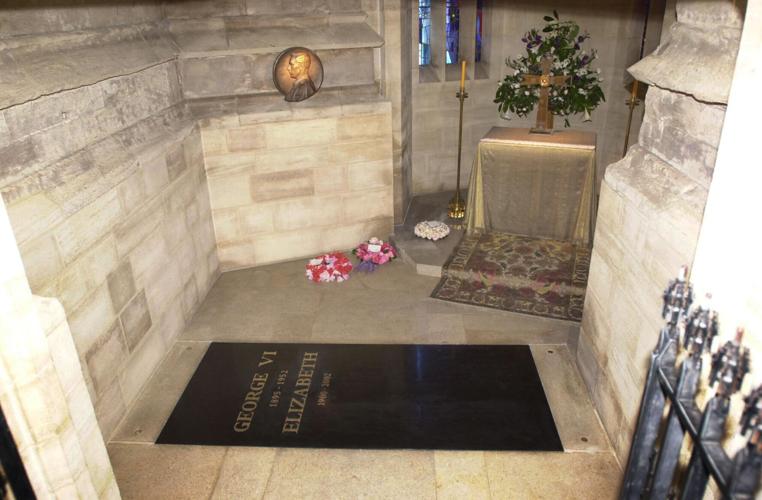 The George VI Memorial Chapel in St George's Chapel, Windsor, where the Queen's father and mother were intered. A casket containing the Queen's sister, Princess Margaret's ashes is also in the vault. 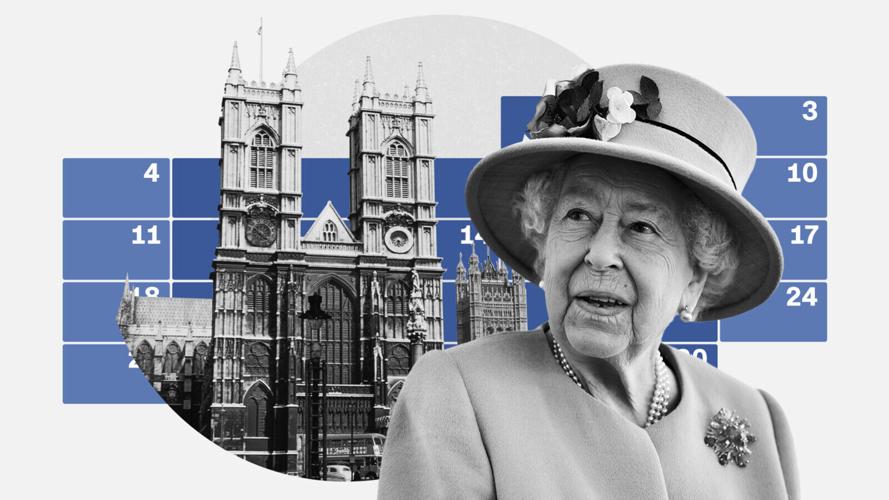 The Queen's coffin has left Balmoral Castle and is traveling to the Palace of Holyroodhouse in Edinburgh, Scotland, marking the beginning of the royal matriarch's final journey ahead of her funeral in London on September 19. 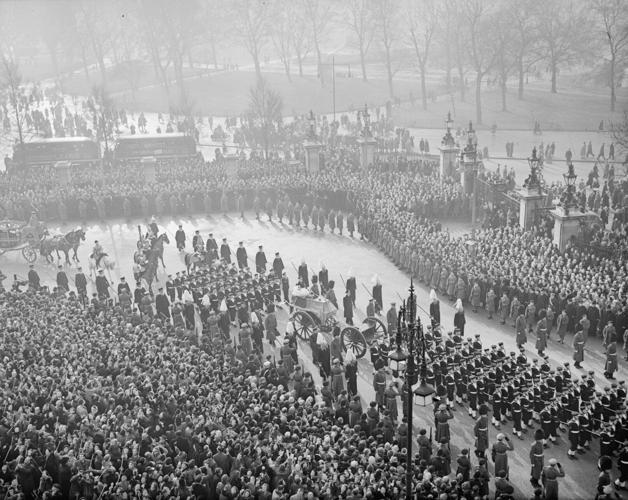 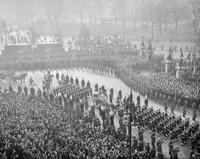 The funeral procession of the Queen's father, King George VI at Marble Arch in London on February 16, 1952.

Then-Prince Charles and his brother Edward, left, stand vigil beside their grandmother's coffin while the Queen Mother lies in state at Westminster Hall in 2002.

The George VI Memorial Chapel in St George's Chapel, Windsor, where the Queen's father and mother were intered. A casket containing the Queen's sister, Princess Margaret's ashes is also in the vault.

The Queen's coffin has left Balmoral Castle and is traveling to the Palace of Holyroodhouse in Edinburgh, Scotland, marking the beginning of the royal matriarch's final journey ahead of her funeral in London on September 19.

The funeral procession of the Queen's father, King George VI at Marble Arch in London on February 16, 1952.

London (CNN)--The death of Queen Elizabeth II has set into motion an intricate period of mourning which will culminate with a huge state funeral on September 19 honoring her lifetime of devotion and steadfast service.

Codenamed "Operation London Bridge," arrangements for Britain's longest-serving monarch have been carefully pored over for years by the many agencies involved, with the Queen herself signing off on every single detail before her death. However, these details were kept under wraps until the sitting sovereign, King Charles III, gave it all his final seal of approval.

The Queen will ultimately be laid to rest within St. George's Chapel, in the grounds of Windsor Castle, alongside her "strength and stay" of 73 years, Prince Philip. Here, we've put together a day-by-day guide on what will happen from now until the state funeral.

Following the Queen's death, her oak coffin -- draped with the Royal Standard for Scotland and a wreath of flowers -- sat in the ballroom at Balmoral, where estate staff had the chance to pay their last respects.

On Sunday morning, gamekeepers carried it to a waiting hearse, and then the beloved monarch left Balmoral for the last time. The first leg of the Queen's final journey saw the royal cortege make a six-hour journey to Edinburgh and the Palace of Holyroodhouse, the official residence of the British monarch in Scotland. The trip by road ordinarily takes around three hours, however, it was driven slowly to allow people to witness the procession and bow their heads as it passed.

An honor guard made up of the Royal Regiment of Scotland greeted the hearse in Edinburgh with a royal salute before the coffin was transferred to the Throne Room by a military bearer party.

Meanwhile, back in London, the King met with the Commonwealth secretary general before hosting a reception for the high commissioners from the realms of which he is now head of state in Buckingham Palace's Bow Room.

On Monday morning, the King started the day with a trip to Westminster Hall where both Houses of Parliament expressed their condolences. He and his wife Camilla then flew to Edinburgh, where they headed straight to the Palace of Holyroodhouse.

In the afternoon, the King led a procession carrying the Queen's coffin to St. Giles' Cathedral for a service of thanksgiving attended by members of the royal family, as well as a congregation made up "from all areas of Scottish society," according to a senior palace official. Afterward, the coffin rested there for 24 hours to allow the Scottish public to see it.

In the evening, the King and members of the royal family mounted their own guard -- or vigil -- of the Queen's coffin.

On Tuesday, the King and Camilla visited Belfast, Northern Ireland, as part of his first tour as monarch of the nations that make up the United Kingdom. The couple visited Hillsborough Castle and viewed an exhibition on the Queen's long association with Northern Ireland. The King then met the secretary of state for Northern Ireland in addition to other party leaders, and received a message of condolence led by the speaker of the Northern Ireland Assembly.

Back in Scotland, the Queen's only daughter, Princess Anne, accompanied her mother's body as it was flown back to London. The coffin traveled 8.2 miles (13.2 kilometers) by hearse to Edinburgh Airport, where it departed for RAF Northolt.

A state hearse brought the monarch's remains to Buckingham Palace, where the King, the Queen Consort, as well as other members of the Windsor clan, were waiting for the coffin's arrival at around 8 p.m. (3 p.m. ET). The Dean of the Chapels Royal conducted prayers and a bearer party founded by The Queen's Company, 1st Battalion Grenadier Guards placed the coffin on trestles in the center of the Bow Room to rest overnight.

Wednesday saw an extraordinary procession take the coffin on a gun carriage from Buckingham Palace over to Westminster Hall, the oldest part of the Palace of Westminster, where the Queen will lie in state until the morning of the funeral.

For this journey, the coffin was be adorned with the Imperial State Crown and a flower wreath. The procession set off at 2:22 p.m. (9:22 a.m. ET) along The Mall, across Horse Guards Parade, past Downing Street toward Westminster.

Senior royals including King Charles III and Princes William and Harry walked behind their beloved matriarch. They were followed by senior staff from the royal households as well as close personal staff and members of the Household Division. As crowds watched the procession -- which took around 40 minutes -- Big Ben tolled and minute guns fired by The King's Troop Royal Horse Artillery at Hyde Park echoed across the capital.

The Queen's coffin was placed on a raised platform -- or catafalque -- in the middle of the hall and is being guarded around the clock by officers from the Household Division, the King's Bodyguard or the Royal Company of Archers.

Upon its arrival at Westminster Hall, a short service was conducted by the Archbishop of Canterbury, Justin Welby, after which the hall opened for the public to pay their respects.

Members of the public filed past the Queen's coffin during its first full day lying in state at Westminster Hall on Thursday.

The hall will be open 24 hours a day until 6:30 a.m. (1:30 a.m.) on the day of the Queen's funeral. The UK government has warned that those wishing to pay their respects "will be required to queue for many hours, possibly overnight." All those attending the lying in state will go through "airport-style" security with only small bags permitted.

Brass plaques in the 11th-century hall mark the spot where Edward VII lay in state in 1910, George V in 1936, George VI in 1952 and Queen Mary a year later. The hall, which is 900 years old, is also where wartime British Prime Minister Winston Churchill lay in state in 1965.

On Friday, the lying in state continued for a second full day. Huge numbers of people lined up in central London for a chance to visit the coffin and be part of this historic moment.

Separately, King Charles and Camilla visited Wales on Friday, bringing their tour of all four nations that make up the United Kingdom to a close.

Public access to the lying in state continues into the weekend. And in a surprise announcement, the Queen's eight grandchildren -- including Princes William and Harry -- will stand vigil beside her coffin on Saturday evening.

Sunday marks the final full day the Queen's body will lie in state in Westminster Hall.

The UK public has also been invited to observe a minute's silence at 8 p.m. (3 p.m. ET) in a national moment of reflection.

On the morning of Monday, September 19 -- declared a public holiday across the UK -- the Queen's lying in state will end. The coffin will then travel in procession once more to Westminster Abbey for the state funeral, the details of which will likely come in the following days.

Westminster Abbey, founded in 960 AD by Benedictine monks, is one of the most recognizable landmarks in London. The historic church has been the setting for every coronation since 1066, and was where the then-Princess Elizabeth married Prince Philip in 1947. But there hasn't been a funeral of a monarch there since that of George II in 1760.

Heads of state and dignitaries from around the world are expected to be invited to the British capital to join members of the royal family to celebrate the Queen's life and unwavering service to the nation and Commonwealth. While a guest list has not yet been announced, US President Joe Biden plans to attend the funeral.

Other familiar faces at the televised service will be some of the 15 prime ministers to have served during the Queen's reign.

At its conclusion, the coffin will travel in procession to Wellington Arch, before making its final journey out of London to Windsor.

Its destination is the now-familiar St. George's Chapel within the grounds of Windsor Castle. It's where Prince Philip's memorial service was held, as well as more jubilant occasions like the nuptials of the Queen's grandchildren.

Following the service for the Duke of Edinburgh in 2021, his coffin was lowered into the Royal Vault, set below the chapel, where many royal family members have been laid to rest. However, he is expected to be relocated to lie together with the Queen in the King George VI Memorial Chapel, located elsewhere within St. George's Chapel.

To get updates on the British Royal Family sent to your inbox, sign up for CNN's Royal News newsletter.

CNN's Anna Brand and Henrik Pettersson contributed to this report.

Why the Omicron offshoot BA.5 is a big deal

Out-of-service satellites must be removed within 5 years, FCC says

GOP Sens. Murkowski and Romney will vote to confirm Ketanji Brown Jackson to the Supreme Court