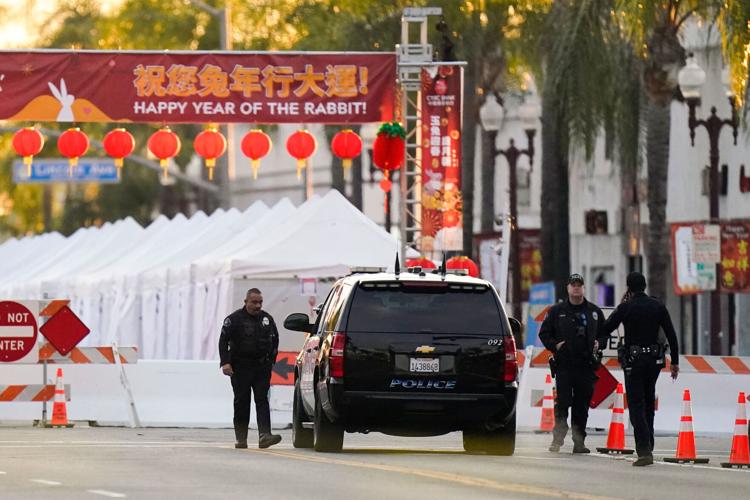 At least 10 people are dead and another 10 injured after a mass shooting in Monterey Park, California, Saturday night. This image shows police presence outside the dance club where the shooting occurred. 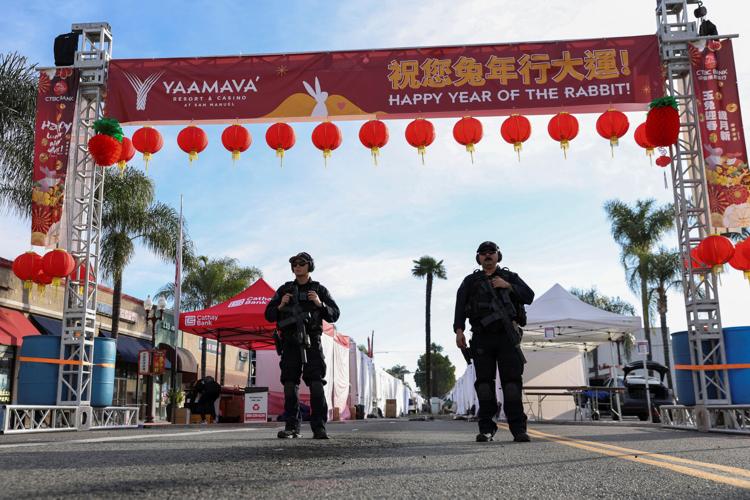 Officers guard the area near the scene of the shooting at Star Ballroom Dance Studio.

At least 10 people are dead and another 10 injured after a mass shooting in Monterey Park, California, Saturday night. This image shows police presence outside the dance club where the shooting occurred.

Officers guard the area near the scene of the shooting at Star Ballroom Dance Studio.

Investigators looking through the home of the 72-year-old gunman who carried out a mass shooting in Monterey Park, California, on Saturday night found a .308 caliber rifle, hundreds of rounds of loose ammo and items that led them to believe he was building homemade firearm suppressors, Los Angeles County Sheriff Robert Luna said Monday.

Police recovered 42 shell casings and a large capacity magazine at the dance studio that was the site of the shooting, Luna said. Investigators also found a handgun in the gunman's white van that was registered to him, he added.

The sheriff announced the details at a press conference less than two days after the gunman opened fire at a Lunar New Year party in the majority Asian American city, killing 11 people and wounding nine others.

To try to find a motive, investigators have pored into the history of the gunman, Huu Can Tran, an elderly Chinese immigrant described as having an interest in dance and a hot temper. He had a limited criminal history, including an arrest in 1990 for unlawful possession of a firearm, Luna said.

"We do not have a motive yet," he said. "We want to know as much as all of you, and we're working very hard to attain that."

All of the victims -- five men and six women -- were over the age of 50, and three were over 70 years old, according to the Los Angeles County coroner's office.

Nhan, known as "Mymy," loved to dance and spent many years at the dance studio where she was killed, according to a statement from her family. Nhan was a "loving aunt, sister, daughter and friend" and was the family's "biggest cheerleader," the family said.

Tiffany Liou, a reporter for CNN affiliate WFAA in Dallas, told CNN and also posted on Twitter that Nhan was her husband's aunt. "Mymy treated her nieces/nephews like her own kids," Liou wrote on Twitter. "Her kindness is what's needed in this world."

The shooting began suddenly at the Star Ballroom Dance Studio, where Tran allegedly opened fire on the crowd of civilians. Afterward, he went to another dance studio in nearby Alhambra, but was tackled and disarmed by a civilian. He fled the scene and police found him a day later in a white van about 30 miles away in Torrance, dead from a self-inflicted gunshot wound.

In carrying out the attack, he used a 9mm semi-automatic MAC-10 pistol with an extended large-capacity magazine, Luna said. The disarmed weapon was traced to the suspect and provided authorities his name and description.

The bloody whirlwind transformed one of the most auspicious days of the calendar for Asian Americans into a day of unfathomable tragedy, yet still one which could have been even deadlier.

The massacre, one of at least 36 mass shootings in the US so far this month, particularly targeted members of the Asian community, who have faced a surge of deadly attacks and harassment since the start of the Covid-19 pandemic. About 65% of residents in Monterey Park are of Asian descent and some 100,000 people from across Southern California typically turn out for Lunar New Year celebrations.

"We've been on edge the last few years as Covid rose and impacted our communities, and the rise of Asian hate in our communities as well," Monterey Park City Council Member Thomas Wong told CNN. "And to deal with this on top of that — for our local community — has just been tremendously tragic."

Authorities are working to put together pieces of Tran's life to understand how he came to the point of mass violence.

In his white van in Torrance, investigators found a handgun as well as "several pieces of evidence" linking him to the Monterey Park and Alhambra dance studios, Los Angeles County Sheriff Robert Luna said.

The sheriff's department also obtained a search warrant for Tran's home in The Lakes at Hemet West, a senior community about 80 miles east of Monterey Park, a Hemet Police spokesperson confirmed.

Hemet Police also said Tran had visited their office two weeks ago and made serious allegations of wrongdoing.

"Tran visited the Hemet Police Department lobby on January 7 and 9, 2023, alleging past fraud, theft, and poisoning allegations involving his family in the Los Angeles area 10 to 20 years ago," police said in a statement. "Tran stated he would return to the station with documentation regarding his allegations but never returned."

Tran had once been a familiar face at the Star Ballroom Dance Studio, where he gave informal dance lessons, three people who knew him told CNN. But it's not clear how often he visited in recent years, if at all.

He even met his ex-wife there about two decades ago after he saw her at a dance, introduced himself and offered her free lessons, the ex-wife said. The two married soon after they met, she said. She asked not to be named due to the sensitivity of the case.

Tran worked as a truck driver at times, she said. He was an immigrant from China, according to a copy of his marriage license she showed to CNN.

And Tran had a hot temper, his ex-wife and others said.

While he was never violent to her, the ex-wife said, Tran would get upset if she missed a step dancing because he felt it made him look bad.

He filed for divorce in late 2005, and a judge approved the divorce the following year, Los Angeles court records show.

Another longtime acquaintance of Tran also remembered him as a regular patron of the dance studio. The friend, who also asked not to be named, was close to Tran in the late 2000s and early 2010s, when he said Tran would come to the dance studio "almost every night" from his home in nearby San Gabriel.

At that time, Tran often complained that the instructors at the dance hall didn't like him and said "evil things about him," the friend recalled. He said Tran was "hostile to a lot of people there."

Tran's friend was "totally shocked" when he heard about the shooting, he said, noting he hadn't seen Tran in several years.

The massacre could have been more deadly if not for the efforts of at least one civilian.

Police first responded to the Monterey Park dance studio at about 10:20 p.m. and found a chaotic and bloody scene, city police chief Scott Wiese said. The killer had inflicted "extensive" carnage and then fled, he said.

A few miles away in Alhambra, Brandon Tsay was working the ticket office of the Lai Lai Ballroom & Studio when the same gunman entered the business his family had owned for three generations. He knew the man was trouble.

"From his body language, his facial expression, his eyes, he was looking for people," Tsay told The New York Times.

"He was looking at me and looking around, not hiding that he was trying to do harm," he said. "His eyes were menacing."

The gunman pointed a semi-automatic weapon at Tsay -- the first gun he had seen in real life, he told the Times.

"When I got the courage, I lunged at him with both my hands, grabbed the weapon and we had a struggle," Tsay said. "We struggled into the lobby, trying to get this gun away from each other."

They struggled for about a minute and a half and Tsay eventually wrested the weapon from the gunman, he told the Times.

Once Tsay gained control of the gun, he told the Times, he pointed it back at the suspect and yelled for him to "get the hell out of here." The man fled, and Tsay called the police.

Sheriff Luna initially said there were two people who disarmed the man but on Monday corrected himself and identified Tsay as the lone person responsible.

"He's the hero that disarmed the suspect at the Alhambra location and in my opinion saved many lives," he said. "What a brave man he is."

Long Covid resolves within year for many with mild Covid, study says

The RSV surge didn't come out of nowhere, but gaps in data made it tougher to predict

4 Muslims were gunned down in Albuquerque. Now some families are afraid to sit outside or go get food

NIH needed help reaching communities of color about Covid-19, but grassroots groups say they were not paid properly