Flood Advisory until WED 2:00 AM HST 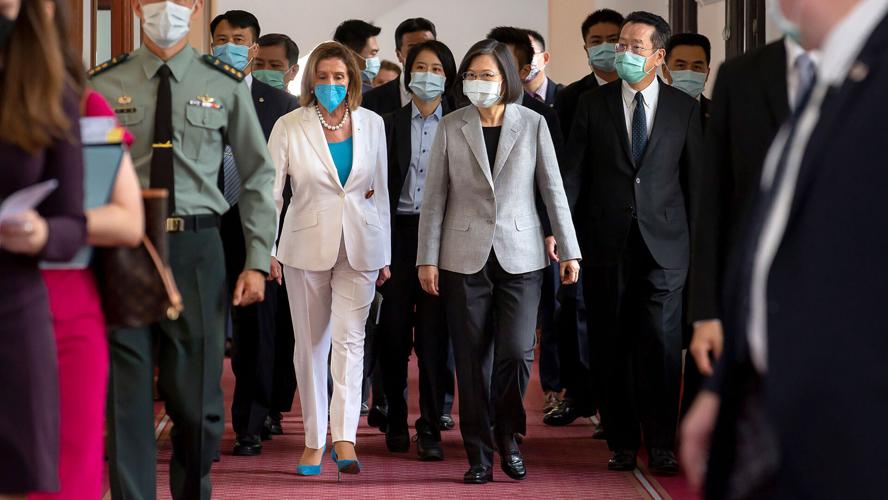 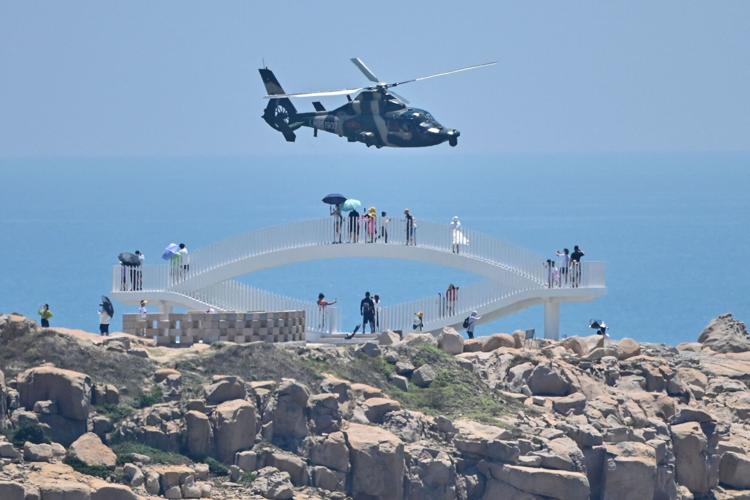 China fired multiple missiles toward waters near northeastern and southwestern Taiwan on August 4, the island's Defense Ministry said, as Beijing makes good on its promise that Taipei will pay a price for hosting US House Speaker Nancy Pelosi.

China fired multiple missiles toward waters near northeastern and southwestern Taiwan on August 4, the island's Defense Ministry said, as Beijing makes good on its promise that Taipei will pay a price for hosting US House Speaker Nancy Pelosi.

China fired multiple missiles toward waters near northeastern and southwestern Taiwan on Thursday, the island's Defense Ministry said, as Beijing makes good on its promise that Taipei will pay a price for hosting US House Speaker Nancy Pelosi.

The Chinese military's Eastern Theater Command said in a statement that multiple missiles had been fired into the sea off the eastern part of Taiwan. It said all the missiles hit their target accurately.

"The entire live-fire training mission has been successfully completed and the relevant air and sea area control is now lifted," China's statement said. Earlier, the Eastern Theater Command said it had conducted long-range, live-fire training in the Taiwan Strait, state broadcaster CCTV reported, as part of planned military exercises around the island.

Taiwan reported Chinese long-range rockets had fallen near its islands of Matsu, Wuqiu and Dongyin, which are in the Taiwan Strait, but located closer to the mainland than the main island of Taiwan. It later said a total of 11 Dongfeng (DF) missiles were fired to the waters north, south and east of the island between 1:56 p.m. and 4 p.m. local time (from 1:56 a.m. ET to 4 a.m. ET) on Thursday.

The Chinese missiles flew over Taiwan Island for the first time, a Chinese military expert said on state television channel CCTV on Thursday, representing a major escalation of China's military intimidation against Taiwan.

"We hit the targets under the observation of US Aegis combat system, which means the Chinese military has solved the difficulties of hitting long-range targets on waters," Meng said on CCTV.

The Taiwanese Defense Ministry said in a statement late Thursday night that the trajectory of the missiles was above the atmosphere and therefore posed no risk to Taiwan.

"Using the surveillance and reconnaissance systems, our military can accurately calculate the trajectory of the Dong Feng-series missiles fired by the Chinese Communist Party," it said.

Because it was predicted that the missiles would land in the waters east of Taiwan, authorities did not trigger air raid alerts, it said.

Chinese state media said that exercises to simulate an air and sea "blockade" around Taiwan had started Wednesday, but offered little solid evidence to back up the claim. Later Thursday, images showed military helicopters flying past Pingtan island, one of Taiwan's closest points to mainland China.

The military posturing was a deliberate show of force after Pelosi left the island on Wednesday evening, bound for South Korea, one of the final stops on an Asia tour that ends in Japan this weekend.

Within hours of her departure from Taipei on Wednesday, the island's Defense Ministry said China sent more than 20 fighter jets across the median line in the Taiwan Strait, the midway point between the mainland and Taiwan that Beijing says it does not recognize but usually respects.

In addition, the ministry said that 22 Chinese warplanes had entered its air defense identification zone (ADIZ) on Thursday, and that all of them crossed the strait median line.

Taiwan's defense ministry said in a statement Thursday night that the military fired flares to warn the drones away -- without specifying the origin or type of drone -- and that it continues to monitor the situation and remains on high alertness.

On Thursday, Taiwan's Defense Ministry said its military was remaining in a "normal" but wary posture, and called the live-fire drills an "irrational act" that attempted to "change the status quo."

"We are closely monitoring enemy activities around the sea of Taiwan and that of outlying islands, and we will act appropriately," the ministry said in a statement.

Taiwan also accused China of "following North Korea's example of arbitrary test-fire of missiles in waters close to other countries" in a statement issued by its Ministry of Foreign Affairs on Thursday.

The exercises have caused disruption to flight and ship schedules, with some international flights canceled and vessels urged to use alternative routes for several ports around the island.

And they have heightened tensions beyond Taiwan's waters. Japan's Defense Minister Nobuo Kishi said Thursday that five missiles were believed to have landed within Japan's Exclusive Economic Zone (EEZ).

"This is a serious problem that concerns Japan's security and the safety of its citizens. We strongly condemn it," Kishi told reporters during a press conference.

Kishi said this was the first time that Chinese ballistic missiles had landed within Japan's EEZ and that a protest had been lodged with Beijing.

Taiwan's President Tsai Ing-wen, who met with Pelosi during her visit, called China's military drills "an irresponsible act," adding that Taipei does not want to "provoke disputes" but will defend its sovereignty and national safety.

In a speech on Thursday night, Tsai said the exercises have "undermined the status quo of the Taiwan Strait, intruded (on) our sovereignty, and heightened tensions in the Indo-Pacific region."

Well in advance of Pelosi's near 24-hour visit to Taiwan, China had warned her presence was not welcome. The ruling Chinese Communist Party claims the self-governed island as its own territory, despite never having controlled it.

China issued a map showing six zones around Taiwan that would be the site of drills in coming days. Taiwan's Maritime and Port Bureau said earlier Thursday that China had added a seventh military drill zone, but later retracted that statement, saying the earlier notice was wrong.

Chinese state media on Thursday outlined a broad range of objectives for the exercises, including strikes on land and sea targets.

"The exercises (are) focused on key training sessions including joint blockade, sea target assault, strike on ground targets, and airspace control operation, and the joint combat capabilities of the troops got tested in the military operations," said an announcement from the Xinhua news agency attributed to the People's Liberation Army's (PLA) Eastern Theater Command, which has responsibility for the areas near Taiwan.

Meanwhile, the Global Times tabloid said the drills involved some of China's newest and most sophisticated weaponry, including J-20 stealth fighters and DF-17 hypersonic missiles, and that some missiles may be fired over the island -- a move that would be extremely provocative.

"The exercises are unprecedented as the PLA conventional missiles are expected to fly over the island of Taiwan for the first time," the Global Times said, citing experts.

"The PLA forces will enter areas within 12 nautical miles of the island and the so-called median line will cease to exist."

Accounts from Taiwan of Chinese military movement included the fighter jets crossing the median line and a report from Taiwan's government-run Central News Agency, citing government sources, that two of China's most powerful warships -- Type 55 destroyers -- were sighted Tuesday off the central and southeastern coast of the island, the closest being within 37 miles (60 kilometers) of land.

But there was little corroboration or firm evidence provided by China to back up the sort of claims posted in the Global Times.

China's state-run television offered video of fighter jets taking off, ships at sea and missiles on the move, but the dates of when that video was shot could not be verified.

Some analysts were skeptical Beijing could pull off what they were threatening, such as a blockade of Taiwan.

"The official announcement (of the blockade) refers to just a few days, which would make it hard to qualify it on practical terms to a blockade," said Alessio Patalano, professor of war and strategy at King's College in London.

"Blockades are hard to execute and long to implement. This exercise is not that," he said.

Patalano said the biggest impact of the exercises would be psychological.

"During the period of time in question, ships and aircraft will likely reroute to avoid the area, but this is one primary objective of the chosen locations: create disruption, discomfort, and fear of worse to come," he said.

China's retaliatory exercises have already caused disruption to flight and ship schedules in Taiwan, though the island is trying to lessen their impact.

Taiwan's transportation minister said agreements had been reached with Japan and the Philippines to reroute 18 international flight routes departing from the island -- affecting about 300 flights in total -- to avoid the PLA's live-fire drills.

Korean Air told CNN on Thursday that it has canceled flights from Incheon to Taiwan scheduled for Friday and Saturday due to safety reasons while China conducts its military drills. Flights will resume on Sunday.

One of the six exercise areas set up by China was near Japan's Yonaguni Island, part of Okinawa prefecture and only 68 miles (110 kilometers) off the coast of Taiwan.

That same Chinese exercise zone is also close to the Japanese-controlled Senkaku Islands, a rocky uninhabited chain known as the Diaoyus in China, and over which Beijing claims sovereignty.

"In particular, a training area has been set up in the waters near Japan, and if China were to conduct live ammunition exercises in such an area, it could affect the security of Japan and its people," Matsuno said.

Meanwhile, the United States military was silent on the Chinese exercises and did not provide any answers to CNN questions on Thursday.

John Kirby, a spokesperson for the National Security Council, said Thursday that China has "chosen to overreact" to Pelosi's visit to Taiwan and that the White House expects further provocative actions "in the coming days."

US Secretary of State Antony Blinken said he hoped "Beijing will not manufacture a crisis or seek a pretense to increase its aggressive military action." Speaking at the Association of Southeast Asian Nations (ASEAN)-US Ministerial Meeting in Cambodia, Blinken said the US remains committed to its "One China" policy.

On Wednesday, Chinese ambassador to France Lu Shaye warned that after "reunification" with Taiwan, there would be a "re-education" of the island.

Besides keeping a close eye on Chinese military movements around the island, Taiwan also said it would strengthen security against cyberattacks and disinformation campaigns.

Taiwan's cabinet spokesperson Lo Ping-cheng said in a Wednesday news conference that the government had enhanced security at key infrastructure points and increased the level of cybersecurity alertness across government offices.

This story has been updated with new information.

US, South Korea to begin expanded military drills next week

The United States and South Korea will begin their biggest combined military training in years next week in the face of an increasingly aggressive North Korea.

No injuries after transformer catches fire at Hoover Dam

Watch the Venus-Jupiter conjunction at the end of April

Takeaways from the January 6 hearing day 7

Russians are blocked at US border, Ukrainians are admitted